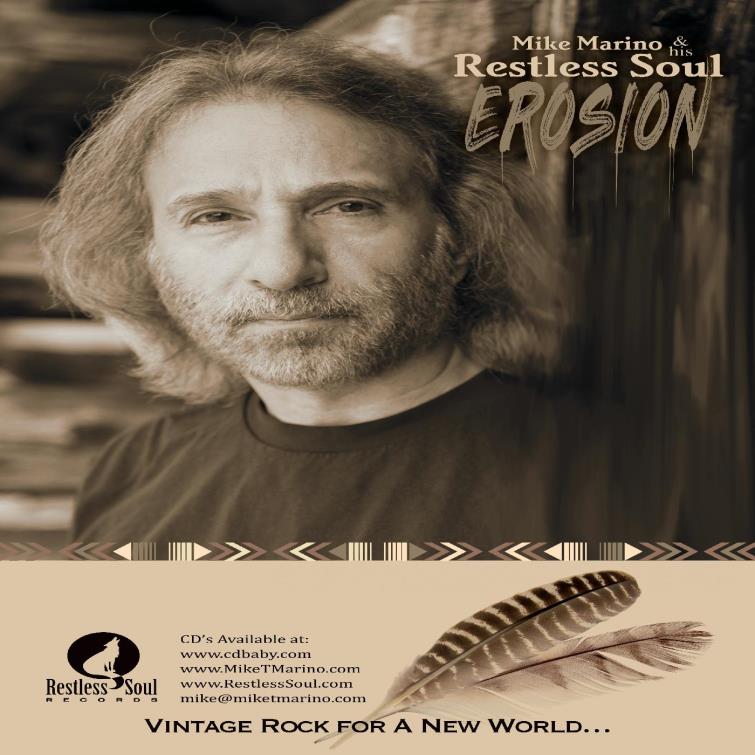 A legend in the music world, Mike Marino & Restless Soul proves to be a Rock n' Roll powerhouse once again. The epic new record comes in the form of "Erosion," which is one of our favorite albums to peak our interest in the start of the New Year.

For the release Marino channels his classic songwriting skills, which is at the very heart and soul of the musical project. Each song flows throughout the album, as the pieces are bold, concise and breathtaking.

Not only is Marino an accomplished songwriter, but a performer as well. His music will take you on a journey that will have your head in the clouds. Among the favorites of mine on the album are pieces such as  "Something In Your Eyes," "Inspiration from Pain," and "Baby It's You," though all of the songs hold their own with a level of distinction.

Mike Marino is a Singer, Songwriter, and Guitarist. Insightful, Subtle and Explosive, his vintage brand Americana Rock draws inspiration from the days growing up on a small South Jersey farm. His fire and intensity fueled by the constant erosion of the American Heartland. Influenced initially by the British Invasion & finally full circle finding his feet firmly planted in the roots of American Blues, Folk & the Bakersfield Country Influenced West Coast Sound.

Mike Marino is bound for even more greatness in the New Year, and we're eager to hear what he cooks up next!

Listen in to Mike Marino on Digital Platforms.