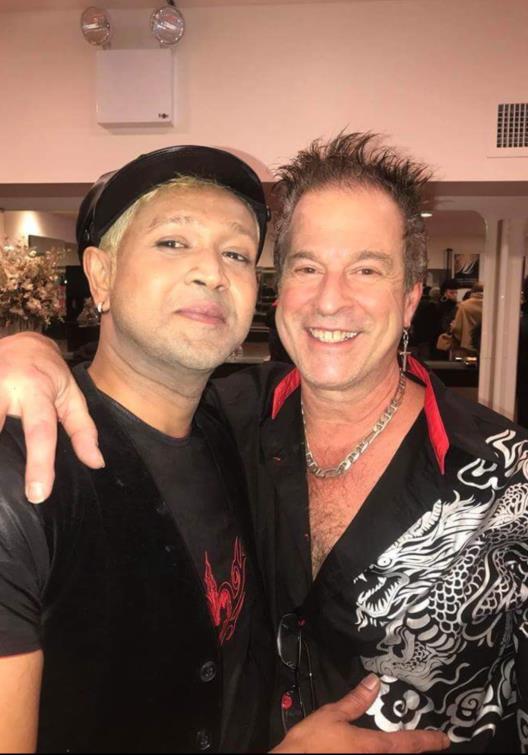 Spectacular! The creation of a magnificent affair with a twist, in the midst of New York Fashion Week frenzy., exceeded all expectations. The original conversation happened somewhat like this: "Billy, Mark is one of the leading hair dressers in New York, as well as internationally....why aren't you doing something for Fashion Week"? Billy Hess, acclaimed Nightlife and celebrity photographer responded, "But Eileen, we only have 3 weeks"....

Billy Hess then brilliantly decided to do the event as a benefit for "Meals on Wheels", an organization close to his heart having helped his own mom. “Meals on Wheels” was designed to make sure the elderly are not forgotten by delivering food to seniors at their homes, or just supplying a friendly face to those who have trouble navigating.

Fast forward three weeks later on February 12, 2018, a decadent celebration, nothing short of an extravagant miracle took place at the confines of the Mark  De Alwis  Hair Salon. Through the frenzied efforts of Billy and Mark an extraordinary event was born. Nothing less than a celebrity infested gala, laced with sparkling  bursts of color, fantasy, and fashion was manifested, featuring Multi-platinum, current Billboard charting, Village People Cowboy, Randy Jones, as host. Nightlife sensation Tym Moss hosted the fashion festivities, and celebrity journalist Michael Musto lent his superb efforts as well..

Despite the back stage madness, the presentation became known as one of the leading, most  prestigious, fashion week events to have ever graced the stages of New York Fashion Week. Flowing with an abundance of wine, cheese, grapes, ambience, and  positive energy, which continued relentlessly throughout the evening, the success of the elaborate display will go down in New York history.

Cowboy Randy Jones was a superb, animated and articulate host, giving a heartfelt introduction as to the reasons for "Meals on Wheels", and then announcing Aaron Paul as lead performer. Capturing an audience has become his forte, however his performance exceeded all presumptions, as he slithered salaciously throughout the audience choosing his new release "Pop Star" as one of his songs, while he prepares for his up and coming for his Carnegie Hall debut on Feb.25, for the Loud 100.

Following Aaron was Tym Moss singing "New York, New York, Nina Blue, the "Amy Winehouse" of New York, who delivered a heart-rendering version of "Rise Up". Mike Greco performed his own original song, while Albanian recording star Mirud brought it as well. Dorothy Bishop gave us a supreme taste of Cher, with her radiant presentation.

The international pop-romance, recording phenomenon, and the James Bond of the Music World, Sam Stevens  premiered his new singles "My King of Crazy" and "Don’t Cry", with a smooth, orgasmic, tantalizing passion, leaving the audience enchanted and mesmerized. His New York  debut charmed, captivated and engulfed the congregation with romantic sentiments , and thrilling sensations. "Don't Cry" is set to release on March 9, and "MKOC" shortly thereafter.

In between the spirited performances, a flamboyant, couture of fashions paraded down the Red Carpet, lead by high fashion models, prominent salon clients, and very hot men, capturing the designs of Renuka Malhi, in one of the most inspirational, vibrant  and acclaimed displays. Her unique sensibility and vivacious efforts included a black wedding dress, sexy garments embraced in red, and  creative spectacles that wowed and intrigued the audience, and heightened the fashion world.

The models also presented the award winning, fantasy endeavors of celebrity hair designer Mark De Alwis, who owns and operates "Mark De Alwis Salon", and who without him and partner spirited, celebrity photographer Billy Hess,  this would not have materialized.

Ending the show in the best way possible was multi-platinum, Billboard charting superstar, Randy Jones singing a fabulous version of "Rhinestone Cowboy" and "YMCA". The sexy Cowboy rocked the stage in one of the best performances I have ever encountered, and when it was over  despite the 3 hour production, the on-lookers still did not leave their seats in hopes of an encore. I work with Jimmy Star and am a NY Times best selling author and rock star journalist....currently write for Get Out Mag, PureM, Classic Pop, Huffington Post, and several others....I write pop culture interviews with well established talent and up and coming great talent...look forward to working with you....